I meant to close the textbook on Real Steel basics with my last post, but I remembered one more thing, so take a seat students.

5. Destroyer Moves
Destroyer moves are a special type of tech move. If you land one of these moves on a part of your opponent that has already sustained a lot of damage, you’ll instantly destroy that part. And as such, these moves have the ability to change the tide of the match in, literally, one fell swoop. I’d definitely recommend using them when you’ve stunned your opponent with a counter. I plan to utilize this tactic during my revenge match with Ue-2.

Continuing my Real Steel basics, here’s my lesson on attacking.

3. Attack Boost
At the intervals during a match, you have the option to recover 25% HP for an area of your robot. But I’d like to take a look at the last option on the list: “Attack Boost”. Though slightly risky, if the enemy ‘bot is nearing the end of its lifeline, it might be a good idea to ignore your current damage, and to just go in for the kill by boosting your attack strength.

4. Countering
“Countering” refers to punching right when your opponent’s attack is about to hit. In fact, you may have done this in the past without even knowing it. The most effective way to counter is using a light attack. Nullifying the enemy’s attack is good on its own, but there’s no reason to stop there. Countering gives you a chance to continue to attack, possibly even stunning your opponent. At that point, you’ll have the opportunity the activate that tech move that’s always tough to land.

Last week, the Xbox360 version of Real Steel was on sale. Although the sale has already ended, there’ll probably be a lot of newcomers to Real Steel this week, and for this reason (and also to help exact my revenge on my sworn enemy, UE-2), I thought I’d put together a quick course covering some of the basics of Real Steel combat.

1. Dodging and Swaying
While most tend to focus on attacking, don’t forget that you can really expand your battle strategy by adding these 2 useful defensive tactics to your bag of tricks. Also, try doing a low attack while dodging―doing so will get you so pumped up that it will actually improve your chances of winning. (At least it does for me!)

2. Repelling
If you push the block button right when the opponent’s attack is about to hit, you’ll repel the attack and leave your opponent momentarily vulnerable. And man does it feel good! The first few times, you might be so excited that you successfully repelled the attack that you’ll forget to go in for the extra hit, but you’ll get used to it with time.

The next lesson will cover the basics for attacking, so stay tuned!

OK so maybe it wasn’t the best idea to make that little April Fool’s joke before. I think I was just digging myself in a hole.

And then suddenly. Ue-2’s newest creation appears at my doorstep.

Did you just decide to use ALL recent parts? Something about this scares me…

The fact that he didn’t even bother painting it just irks me. So I’m not gonna put up a fight worth coloring your robot for?? From what I’ve heard, he’s named it “WETS”. WETS!? More like DRY, as in your sense of humor.

Ahh jeez…I feel like I’m about to get soaked. I don’t even know if it’s going to be in tears or in blood.

Hate to say it, but I don’t recall ever being called good-looking. While I’m not going to wallow in self pity about my looks, I will say that the face of a robot is important for first impressions. So today, without further ado, I thought I’d talk about some of my favorite head parts in the game.

The Tagma Head has this organic, Phantom of the Opera-type thing going on. It almost looks like he’s going to suck his opponent’s oil out like a vampire sucks blood.

Berserker Head is awesome because it makes you feel like a samurai when you equip it. The plates attached to the bottom to protect the neck are pretty sweet, too.

Lastly, Ultratech Head who, imho, is just beautiful simplicity at its best. Who needs fancy features anyway? BAM. I HAVE A HEAD.

They say the face determines the personality of a doll. And I’d have to agree.

A new set of robot parts is being released next week. Say hello to Scyphon! 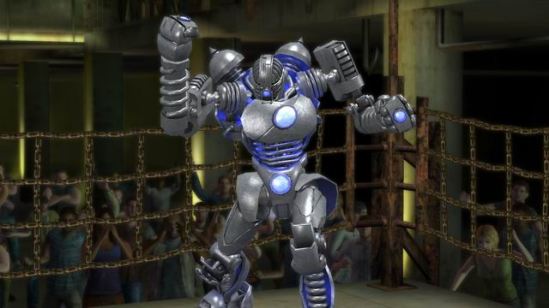 You may notice the bell-thingys on his back, but the most important thing about this guy is his stretching arms. As seen below, his arms stretch for certain tech moves. 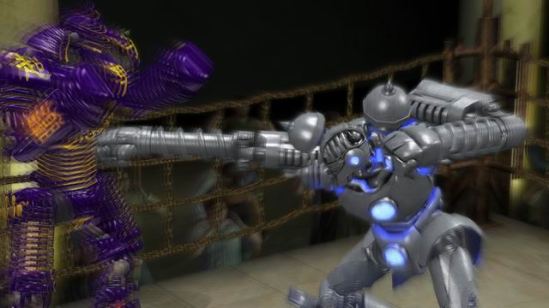 I have a soft spot for these kinds of arm gimmicks. These new parts will be released sometime next week, so feel free to experiment.

Starting on 4/10, for a limited time, the Xbox 360 version of Real Steel will be on sale for a special low price.

During this sale, you can purchase the game for 320 microsoft points, instead of the regular price of 800.

Take advantage of this offer to purchase Real Steel for yourself!

Road to Revenge.
This post hereby begins my transition into the WRB. The first match is against Hattori 2.0. I figured I’d be able to breeze through these early matches.

But I just can’t hit with my moves! Noisy Boy was a pretty vigilant blocker, but this guy also mixes in dodges galore. 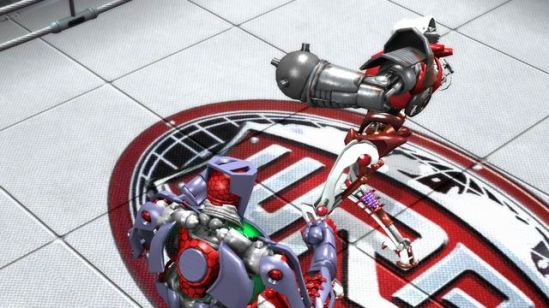 So I lost…which is unexpected, ’cause I thought all the work it took to defeat Noisy Boy meant that I had a green light to move forward. 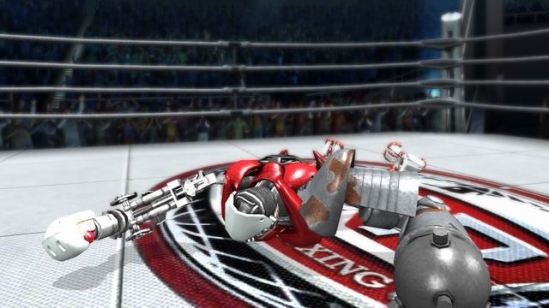 There’s something I noticed during my feud with Noisy Boy. Unlike my creation, Avenger, Noisy Boy has a consistent design which overall, I must admit, is more aesthetically pleasing than mine. With this post, I wanted to talk about some other robot part sets that work great just the way they are.

First, Chromium.
The fact that he has spikes all over his body, and something about that dopey, pushed-in head, just makes him seem like one of those robots that are manufactured in great numbers. Let’s just say he won’t get his own sitcom anytime soon. Cool design, though. I’d like to see him in khaki.

Next is Quadritech.
For some reason I just look at this guy and think he wandered into this game by accident from somewhere else. “Hello, and what Universe are you from?” But hey, it’s all in good fun. Actually, I think he’d look awesome with a sword. 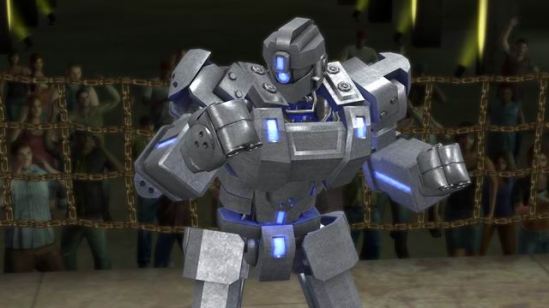 And last up, Nectron.
This goes without saying, but WOW, this guy gets max points on the creepiness scale. I especially love that you can actually see his spinal chord. 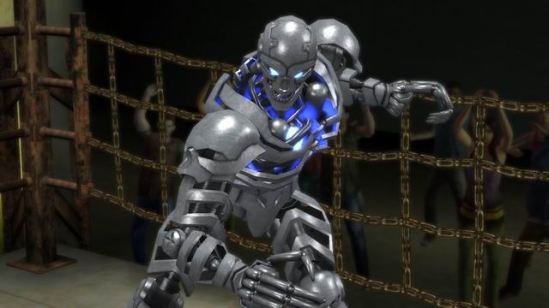 Each of these part sets looks like they were created as a whole robot, so it might be fun to try playing with them without switching out any parts. Just a thought.

The day hath come. The day when I would exact my revenge on my ultimate rival, UE-2. And standing in my sworn enemy’s corner: MEGAUE2-R. He looks more intimidating than ever, but having recently ascended to the WRB, I, too, am different than who I was before. And with the ring of the bell, the battle is afoot!

He has me on the defensive from the start of the match. But this much is to be expected from a great trainer.

I should have some opportunites to strike…but my skill just doesn’t compare to his. I guess this is what it’s like to face off against someone who really knows the deep, inner-workings of the game… 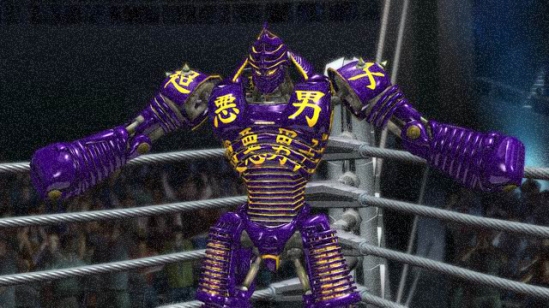 What!? Why, it’s the voice of Noisy Boy, resonating in the back of my head! I won’t let you down! Nor will I submit to the rival whom I’ve sworn revenge against! Feel my wrath, MEGAUE2-R! Or shall I say, UE2!

I WON!! Part 3 of this tale of vengeance has come to a close!

That’s what I would have liked to say, but…
April Fools! I will say this though: when I actually do fight my rematch with UE-2, I’ll do my best to be able to copy and paste most of the above text.